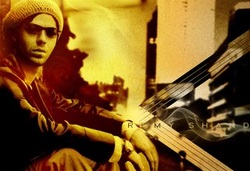 A gray May afternoon in Vancouver. The black monolith of a tour bus has pulled into the alleyway behind the Gastown nightclub Sonar and disgorged its dozen passengers.  After a quick sound check and a scavenged meal from the club’s deli tray,  most of the musicians and crew return to the bus for a few extra hours of sleep after a late night in Seattle.  Not the evening’s star attraction, though.  With skeins of tangled red hair emerging from under his trademark knit cap, Remy Shand smiles brightly as he steps forward for another in a long series of media meet-and-greets.  The handshake’s firm. His eyes lock into mine from behind blue-tinted glasses.  As advanced billed by his various handlers, he’s polite, humble and singularly lacking in  “ain’t I special” attitude. Clearly this isn’t your average superfly soulman from North Winnipeg.

No question the 6’3” 24 year-old sounds the part on a debut album that has earned high grades from critics, spun off a pair of unstoppable hit singles (Take A Message, Rocksteady) and sold well in North America, Europe and Japan. Released in March via the legendary Motown Records,  The Way I Feel has quickly established Shand as a leading male voice in a “neo-classical soul” revival marked by deliciously seductive make-out music from Alicia Keys, Macy Gray and Jill Scott, among other black Americans. Think primetime Al Green, Marvin Gaye and Curtis Mayfield if you’re old enough to have been sentient and plugged into funk and soul circa 1969-76.  If, like the artist, you’re part of generation-next, then his old-school sound is fresh and brand new, a warmly human counterpoint to the machine-tooled plasticity of  Britney and the boy bands.  Songs of yearning and heartbreak. Played on real instruments with real skill. Written, recorded, arranged and produced all on his ownsome in a spare bedroom of his parents’ second-floor condo, located not in Memphis or Hitsville, U.S.A. but  in the prosaic environs of Winnipeg’s Garden City suburb. Sung with a gravity-defying falsetto that suggests mum and dad might have chosen a different part of the musical scale (“so-la-ti” perhaps) when choosing a first name for their only child.

Settling onto one of Sonar’s bar stools,  Canada’s brightest new pop star of the moment admits he’s still very much at the pinch-me stage of his emerging career. His manager has phoned to say the CD is “five minutes short” of going platinum in Canada. He’s writing songs for Smokey Robinson. Yes, he says with a wide grin, hearing Sir Elton John hype him on Rosie O’Donnell was dandy,  but winning over a skeptical audience in Detroit, on Motown’s home turf no less, was a “real Alice In Wonderland moment.  That was big pressure. The venue was sold-out. People were saying, ‘Is this white guy for real? Can he cut it live?’ Well, it was an awesome night. We laid to rest a lot of doubts right then.”

Doubts seem to have rarely troubled Shand himself, not least because his parents supported his dream unconditionally. Doug Shand, a construction worker and carpenter,  played music as a hobby; by kindergarten, his son had a grasp on rudimentary recording techniques and had spent the first of what would become thousands of hours immersed in the family  LP collection.  Following elementary school, Lana Shand took Remy under her wing and home schooled him. That isolation made him something of a loner, but he happily lost himself in his own creativity.  For a spell he tried his hand at claymation before the grind of manipulating plasticine limbs at the rate of 24 frames per second proved too tedious. As pre-teen hormones began to rage, he turned to music as a more immediate and satisfying outlet.  He studied master producers like Willie Mitchell (the architect of Al Green’s greatest croons) and Funkadelic’s George Clinton obsessively while painstakingly assembling his own soul symphonies.  By 13, an age when many kids are still being driven to soccer practice, the Shands were escorting their pint-sized Prince to his first professional gigs with a band.

“Nobody seemed to mind that I was underage,” Remy says today. “I guess I was always pretty level-headed and mature even then.”  The life lessons had begun in earnest when the Shands briefly operated a skateboard shop in the late 1980s. “I saw good kids turn bad and go through their growing pains without having to make my own mistakes.”  The family itself experienced some pain when the business failed.  “A man from the bank told us we had three days to clear out of our house. So as a little kid I just sat back and took notes. And what I learned was: ‘Set up a plan and follow it through.’”

Required by provincial legislation to clock time in the school system, Shand attended Garden City Collegiate for Grade 11.  Studies in ear-training and improvisation expanded his musical skill set dramatically. Academically, however, he barely scrapped through.  “I slacked off. There was too much socializing and hanging out with friends.”  Unable to return to formal home schooling, he dropped out with parental blessing. “They  said, ‘Okay, we’ll give you three or four more years to get it together musically.’ And I just went after it.  I’m going to be working on repaying them for all the support they gave me for a long time.”  A chunk of his Motown advance, in fact, was passed on to Lana to finance a vintage clothing business operating through eBay.

Shand paid his dues as a sideman in a succession of bands,  curbing his own enthusiasms while his mates pursued their dreams of being the next Grateful Dead or Radiohead.  By the time he was 19, however, his homemade R&B tapes were creating a minor buzz.  “Doug and Remy were part of the family here,” says Bruno Deleau, assistant manager at leading Winnipeg music store Mother’s Music.  “Remy would bring in the stuff he’d recorded and we were all just flabbergasted, it was that good.” With Deleau’s help, the tapes began to circulate. Local talent impresario Glen Willows was in the loop early. “It was raw, but you could tell that the guy was a producer with a vision, not just a talented kid who could play and sing,” recalls Willows, a member of ‘70s rock act Harlequin.  “The shock was that he’d done it in his parent’s apartment with cheap mics he’d bought in pawn shops.” Before long Steve Warden, a former Winnipeg DJ turned Toronto-based artist manager, was putting together label deals –- first with Universal Music in Canada, then the world-wide pact with Motown, where Shand is fondly known as the “Eminem of neo-classical soul.”    Eminem minus the nasty streak and ten-ton chip on the shoulder, that is.  Veteran broadcaster Howard Mandshein sums it up best: “He seemed to me to be humble, down-to-earth, friendly -- the antithesis of the towering egos you often encounter in music. Good parenting. Good roots. He’s a gifted individual.”

Those gifts dazzle when Shand and his five-piece band appear on Sonar’s tiny stage that night.  He’s flanked on his right by boyhood pal Neil Chippendale on guitar and on his left by wife and back-up singer Maiko Watson,  a star of her own in her former life as one-fifth of the made-for-TV pop band Sugar Jones.  The band slides from one tight, expertly executed number to the next before detouring into improvisational free space as the hour-long set hits its home stretch.  Beaming behind his bank of keyboards like a whitebread Stevie Wonder, Shand appears wholly unselfconscious, an open-throated natural doing what comes naturally.  A marathon overnight bus ride south to California awaits, but right here, right now,  Winnipeg’s soul brother number one is in his element.