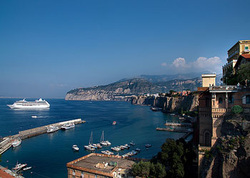 A fool’s game, one friend told me, a no-win proposition and spoil-sport way to excise the calorific fun from cruising. My fanciful idea: To see if it was remotely possible to walk, not waddle, off a luxury ship feeling fitter and healthier than when one stepped aboard. The odds were stacked against me from the outset. Culinary temptation is one of the industry’s prime attractions. Mix decadent dishes with poolside downtime, and extra  baggage around the waist is proof of purchase. The commonly held wisdom, in fact, is that the average cruiser gains a pound per day. More to hug, the cheerful trill. More to fret about, say those of us who’ve waged a life-long battle of the bulge.

Sailing with Silversea, the “six-star” cruise line and repeat winner of Travel + Leisure’s best small-ship crown, narrowed my chances dramatically. The Italian line with the fleet of four pocket-sized luxury ships is renowned for its Relais & Châteaux chefs and nightly five-course feasts. Good food needn’t be fattening, however, and last year Silversea began catering to guests interested more in revitalization than indulgence. Light, low-carb and vegetarian options are plentiful. Yoga, Pilates, step aerobics and boxercise fill a busy fitness schedule. The Mandara Spa promises to “relax, rejuvenate and renew.” All a passenger need contribute, spa manager Lisette tells me with a smile, is dedication, will and steely discipline when faced with the dessert menu.

No alarm bells are raised by the bite-sized canapés served with a welcoming flute of champagne when my wife Carolyn and I step aboard the 380-passenger Silver Whisper in Villefranche, just west of Nice on the French Riviera.  The first hint of trouble: A golden box of Godiva chocolates sitting next to the floral arrangement in our suite. Thinking fast, I place it in the room’s safe alongside our stash of euros.

My strategy is simplicity itself: Eat smart and exercise hard as we cruise for 12 days down the Italian coast to Malta, then east across the Mediterranean with stops in Crete, Rhodes and Turkey.  Night one in the elegant formal restaurant goes as planned, our jetlagged appetites sated by king prawns marinated in Indian spices and a fillet of broiled fish – both highlighted on the menu by a tell-tale feather signifying “light (low cal).” Carolyn has sent advance word about her dietary restrictions, and our waiter steps up with a basket of tasty, gluten-free bread to accompany her asparagus soup. We bravely pass on the tiramisu, then fall into dreamless sleep in our gracious cabin, the bon-bons safe behind their reinforced steel door.

Awaking early to watch the ship pull into the busy Italian port of Livorno, I do my first set of laps around the promenade deck.  I pace myself at the flying heels of a group of Japanese power-walkers, clocking a mile with nine laps. Breathing hard, I join Carolyn at the splendid breakfast buffet, where we keep it light and fruity despite the offer of made-to-order omelettes.  After strolling the town’s Venetian quarter and soaking up atmosphere in the market square, we in turn are soaked as a thunderstorm breaks over our heads on a mad dash back to the ship. A spot of tea later, we slip into gym togs and check in for our first yoga session with Donna, our Australian fitness director.  Just four of us stretch out and salute the sun in the ship’s mirrored exercise room. Neither are there many bodies using the treadmills in the nearby weight room. So it will go throughout the cruise. The clientele, somewhat older than the norm, is here to relax, not work up a sweat. And why not when one can sink into a fantasy life where a uniformed staff numbering in the hundreds is at one’s constant beck and call?

My inevitable decline and fall begins on day three in Sorrento following a bus tour to Pompeii. We’re drawn irresistibly to a sidewalk café not far from where Noel Coward penned the lyrics to “A Bar on the Piccolo Marina.” Yellow awnings and chequerboard  tablecloths. Lively music. A glass of full-bodied Chianti. An Italian Speciale pizza – mozzarella, basil, cherry tomatoes and wonderfully chewy crust. A second glass of wine. Lemon gelato. And a deep, satisfied sigh to finish.

Back aboard the Silver Whisper, I attempt to redress my sins in Pilates class. Donna orders us to crunch those abs, not so easy when we’re all cracking up at the jibs of a witty chap who turns out to be an English lord of the realm. Feeling justified by all that exertion, I go for broke at dinner as we float past the Isle of Capri. Tuscan bread salad. Lasagna al forno. Lemon sole with garlic mashed potatoes. A large chunk of chocolate cake dripping in cranberry sauce. I've not only fallen off the wagon, it's lying face down in a ditch, wheels spinning.

Two days later, a heady period in which I’ve discovered the aromatic wonders of the cheese trolley, I weigh myself on the spa’s electronic scales. The result: Five new pounds. Ever the diplomat, Donna tells me not to worry, the machine often malfunctions at sea. I begin querying my fellow sybarites. How do they cope with temptation? Most simply guffaw loudly and wonder why I’d ever consider resisting anything on a ship this laden with bounty. Some veteran cruisers follow a binge-at-sea, purge-at-home philosophy. Dietary cleanses, detox programs and colonics are recommended. One Swiss gentleman tricked out in a white dinner jacket tells me that a simple pasta diet – lots of olive oil but no cheese or sauce – combined with bottomless glasses of water does the trick for him.

I dream up a new theory for my extra pounds as we slip into harbour past the spot where the Colossus of Rhodes once stood vigil: Let’s call it muscle and the right kind of body mass. Vigorous urban hikes in Sicily and Malta, daily circuits around the ship’s green astroturf deck and loyal attendance at Donna’s classes have me feeling sore in unfamiliar places.  True, I can detect the morning’s stack of blueberry pancakes making themselves at home in my midriff, but Carolyn and I step lively in Rhodes as we navigate past the medieval town’s tourist traps and preview Dan Brown’s next bestseller (we fancifully imagine) by exploring the austerely beautiful Palace of the Grand Masters, erected in the 14th century by the crusading Knights of St. John.

Back aboard ship, I take a yoga class, then slip into the spa for a peaceful shiatsu massage. An hour later, I’m sweating out any remaining toxins in the sauna while chatting amiably with a winemaker from Santiago, Chile. With the ship rolling deliciously in the teeth of a strong wind, Carolyn and I end the day in the pool, its chlorinated water shaken and stirred into an approximation of whitecapped surf.

The final days pass in a hedonistic blurr. We dine in La Terrazza, the ship’s Italian specialty restaurant, on a series of dishes loaded with porcini mushrooms. I’m presented with a “Certified Official Martini Taster” certificate by our genial head bartender Sujith for my cruise-long “one of each” assault on the cocktail menu. The work-outs continue, but now I’m more likely to be found at the nightly putting competition helmed by Glenn, our Winnipeg-born golf pro, or playing shuffleboard with a lively gang from Tokyo.

On our final night in Alexandria, I bravely weigh in one final time. Eight extra pounds have somehow found their way onto my frame – four less than the norm for a cruise of this duration but still rather more than I’d hoped. The upside: Rather than feeling sludgy, I’m in fighting trim, proud of the faintest, ghostly hint of a six-pack on my marginally less flabby belly. The Godivas had been ravaged not long after we hit the Aegean and an all-pasta, no-sauce diet awaited me back home. Yet I felt satisfied that my brand of healthy indulgence had let me have my torta and eat it too.