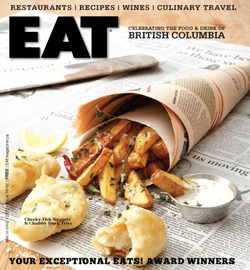 
Blue-eyed, flame-haired Lisa Boehme has regained her mojo and then some. After flirting with burnout in recent years, she’s relaunched her James Bay restaurant as The Superior, dropping “cafe” from the title and gearing down from six nights a week to a more manageable Thursday-to-Saturday night supper club format. Live music, film-noir nights and famously eclectic furnishings remain hallmarks of one of Victoria’s coziest, hippest rooms. Meanwhile, Kevin Hernandez (Boehme’s new husband and mojo-maker in chief) and Kellen Musseau are continuing popular ex-chef Torin Egan’s innovative ways with all things local and organic.

Boehme certainly appreciates the value of evolutionary change. Her latest aesthetic makeover of the Superior is the 38th such seasonal facelift since the room opened in 2005. The spring look features a floor-to-ceiling repaint, a collection of fur-bearing taxidermy pieces and, appropriately, a “survival of the fittest” blackboard quote from Charles Darwin.  “The restaurant trade isn’t easy at the best of times, and I’d been unhappy the last few years,” she says. “With Torin heading off for new adventures, we needed to adapt or die. Now we’ve removed a lot of the pressure and still retained everything that makes this place so special.  All of us here are totally excited about where we’re headed.”

One new wrinkle: VIP guest chefs will be taking over the kitchen on occasional Saturday nights in the future, an initiative that Boehme figures makes her 1912 heritage hideaway even more of an event-oriented destination restaurant. “We’ve giving some of the Pacific Northwest’s amazingly talented chefs a chance to shine in a new setting. It’s a win for them, for us and for local diners.” First on deck on May 25 is Castro Beotang, former chef at the Aerie. Daidoco’s Naotatsu Ito and the Sooke Harbour House’s Robin Jackson are booked for a collaborative evening on June 28.

Lighting up with another smile, Boehme reveals she’s also headed back to her coffeehouse roots. Upon relocating from La Jolla, CA. with her antiques-dealer dad John in the mid-1980s, she launched and ran for a decade one of the city’s first cool java joints – south Johnston Street’s La Boheme.  Early this spring she won approval from City Hall to operate what promises to be a landmark coffee stand on the sunny west side of the same building that houses The Superior. The Mortis Cycle Donut Company, as it shall be known, will feature takeaway barista drinks, 2 Percent Jazz coffee and baked goods made by Hernandez, a veteran of Seattle’s celebrated Macrina Bakery. “We’ve named it after the fact that I call Kevin ‘mon amour,’ and he calls me ‘mon amortis,’” she says with a bright laugh. Swooning little deaths are sure to ensue as patrons bite into fresh biscuits, donuts and homemade ice cream sandwiches in the months ahead.

Every other Friday, a delivery van drops off four halves of two “happy pigs” raised like free-range royalty on cabbage and boiled eggs at Qualicum’s Sloping Hill Farm. Luke Young and Paige Symonds immediately get busy with hand saws in their kitchen at Choux Choux Charcuterie. “We’re like Mennonite butchers,” says Young, flashing a first hint of his dry wit, “only we own cel phones and listen to music while we work.” In short order, the pair transform flattened sides of meat into bacon, ham, sausages, terrines and pates soon to be snapped up by the regulars who frequent their jewel-box of a former antique store on Fort Street.

Like grandfather, like grandson: Ralph Young was a butcher in Gravenhurst, Ont. “He was a meat-cutter, plain and simple,” says Luke, 36, who also makes quick work of chicken, rabbit, beef, turkey and duck. “He’d packed in his knives before I can remember, but I do have a butcher block with a plaque that reads ‘To Muskoka’s finest butcher, Ralph Young.’ That’s pretty cool.”

Young studied at Vancouver’s Dubrulle Culinary School before arriving at Raincity Grill for two pivotal life moments in his mid-twenties.  Then-chef Sean Cousins shifted him to a trainee role as house butcher “just as I was losing my mind doing 200 covers a night as a saucier. I spent my days slicing through mountains of salmon, halibut and black cod, then moved on to whole animals - a Raincity specialty way before the ‘nose-to-tail’ phenomena took off.”

He also fell for Symonds, a Victoria native who’d replaced him in the restaurant’s kitchen brigade. The two ran off for the first of several spells in France, footloose and broke but soaking up knowledge at every turn. Symonds apprenticed on a goat farm near Toulouse, where she began developing an expertise reflected in the shop’s selection of imported cheeses. The pair also learned the butcher’s trade in earnest in Vancouver – Young with Dunbar’s Meet the Butcher, Symonds at Oyama Sausage Co. on Granville Island.

Fast forward to spring 2005. “We had $10,000, no business sense and a lot of faith. Paige and I tore out everything, painted, did all the renos ourselves and worked the front counter. It was chaos.”  Local carnivores were ecstatic, however. And the pace has mellowed as staff were added, a lunch menu established and wholesale accounts opened (led today by Pizzeria Prima Strada and Dockside Green’s Fol Epi).

“It’s been a big learning curve and business has gotten a bit better every year,” says Young, who bikes to work daily from the Finlayson/Cook St. neighborhood home he shares with Symonds and a beloved Elkhound. He’d love to see his end of Fort Street evolve further into a foodie mecca, and would welcome a patiserrie or specialty wine store as a neighbour. “So many businesses come and go around here. The sushi and cigarettes joint failed, because of course when you eat sushi you want a cigarette for dessert.” He pauses for droll comic timing, then continues. “But we’re seeing some great independent businesses root in for the long run and we intend to remain one of them.”

“One of Victoria’s best-kept secrets,” tweeted Olympian Simon Whitfield after sending a CBC National crew to Relish Food & Coffee for a post-interview meal. Jamie Cummins’ brick-walled boite on a hardluck stretch of Pandora Street isn’t hush-hush among local foodies, however. Its two awards in last year’s EAT readers’ poll are matched these days with a brisk morning to mid-afternoon trade drawn by the menu-du-jour snapshot posted daily on the establishment’s Facebook page.

The affable, sandy haired Cummins, 34, opened Relish in August 2010 to quick acclaim. Simple, fresh and as local-as-possible was his credo as he melded a first-rate barista joint with a casual lunchtime spot. It was the logical next step for a Victoria boy who had entered his twenties pursuing a music career and left them with an impressive culinary resume.

Dad was a building contractor and mum an elementary school principal.  Learning piano and playing improv jazz were teenage passions, though he also enjoyed working the backyard barbeque alongside his father. Cummins bought his first two cookbooks of necessity after leaving home: Eileen Yin-Fei Lo’s Chinese Kitchen (“since I was fascinated by all the cool stuff I saw in Chinatown”) and Toronto restaurateur Wandee Young’s Simply Thai.

Home cooking helped him through some lean years with the roots rock quartet Elephant Island, which released three CDs and, like so many worthy acts, couldn’t catch a break. In his mid-twenties, he turned to food, a field in which he could be just as “creative, spontaneous and expressive,” he says. He keeps his chops up these days with The Tin Sea, an indie folk aggregate of local musos.

Cummins made smoothies at the Rebar juice bar, then began experimenting at home with what he calls his first “real” kitchen bible, Thomas Keller’s French Laundry Cookbook. After being part of the Mo:Le launch team, he studied at Vancouver’s Northwest Culinary Academy before joining then-chef Edward Tucson’s crew at the Sooke Harbour House. In 2006, he moved to Paprika Bistro to work in George Szasz’s kitchen at a time the owner was busy launching Stage in Fernwood. “It was a real confidence booster to get that kind of trust from a man like George.” When Szasz sold Paprika two years later, Cummins joined his friend Dwight Joinson’s KnifePro and did on-site sharpening at regional restaurants. “Talk about a perfect way to learn how other chefs run their operations,” laughs Cummins, a quick study who also clocked time at Discovery Coffee learning the java trade.

It’s all come together sweetly at Relish, which required only minor renovations to what was previously the Village Family Marketplace deli (run by Mo:Le’s Cosmo Meens). The neighborhood is sketchy by Victoria’s mild standards, Cummins agrees, yet he has encountered few problems. It helps that he and his staff of three are known for their sunny disposition and, above all, the quality of the fare. “The crispy smoked chicken, the pork sandwich, the brownies … if they’re sold out or not on the menu, people get upset in the kindest ways.” Such is the sound of music to chef’s refined ear.