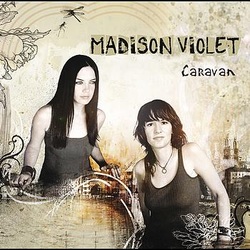 Brenley MacEachern and Lisa MacIsaac do their best songwriting in remote places and confined spaces. Caravan, their second album as the Toronto-based duo Madviolet, draws its title from a vintage motor home they occupied for three weeks in Byron Bay, just south of Brisbane, following the completition of their first Australian tour. With the Pacific crashing onto a white sand beach and cockatiels delivering raucous wake-up calls, the pair hunkered down with their guitars in the spring of 2005 and wrote many of the new album’s ten songs. They’d surf, bike and play backgammon in the mornings, then begin work after lunch, pausing each evening to barbeque fresh fish and drink wine under the Southern Cross. Escaping the sun, they wrote in the dusky interior of the camper, a silver-with-maroon-stripe 1965 Morton Caravan they nicknamed Greta. “There’s something about a cramped van that works for us creatively,” explains Lisa. “It squeezes whatever’s inside of you out.”

A similar getaway to the New Mexico desert produced material for Worry the Jury, Madviolet’s 2004 debut album. As they did then, they took their Byron Bay tunes and a few rewrites completed with Ron Sexsmith to producer and friend John Reynolds (Sinead O’Connor, U2) in London, England.  Unlike the pop-oriented, sumptuously produced Worry the Jury, the mission this time was to capture Madviolet’s live personality and musical roots. The result is a smart, richly melodic singer-songwriter album where contemporary alt.country rubs up against confessional ballads, roadhouse rockers, Lisa’s Cape Breton fiddle playing and even a streak of old-school Nashville that would do Brenley’s namesake, Brenda Lee, proud.

Above all, Caravan captures Madviolet’s growing confidence as a songwriting and performing partnership.  “Every band needs time to grow into its true self,” says Brenley. “We now have a better sense of what we can accomplish together.”  Instead of recording their vocals separately as they’ve done in the past, the two sang face-to-face in a process that facilitated their gift for intuitive harmonies.  Brenley again handles the majority of lead vocals, including Way Past the Hour, Skylight and I Am An Only. But now the two Libras (both born on Wednesdays in October at noon precisely) have balanced the creative scales more evenly. Lisa sings three songs, including Prayed, a vivid take on spirituality that arrived in a bolt of middle-of-the-night inspiration. And after focusing on guitar in recent years, she again steps forward as a fiddle player in the MacIsaac family tradition. Her extended solo brings Caravan to a riotous close on “Never Saw the Ending,” which itself ends with a shouted “yee-haw” from Reynolds.

“We’re extremely proud of Worry the Jury,” says Brenley of an album that generated top-40 airplay, a clutch of Radio Starmaker Awards in Canada and several East Coast Music Award nominations. “But it was a difficult to reproduce live.” Touring is Madviolet’s favorite pastime, and the band dedicated nine months of 2005 to the concert trail. “People were always asking, ‘Don’t you have a record that sounds more like just the two of you?’ Well, this is it.”

Both women are steeped in acoustic, folk and country traditions.  For Lisa it’s a matter of genetics. She began playing fiddle at Cape Breton kitchen parties as a child and turned professional in her mid-teens, wracking up mileage on Celtic roadshows with her brother Ashley, Bruce Guthro and Gordie Sampson, among others.

Brenley was raised in Ontario by parents with a passion for country music and, on her father’s side, deep Cape Breton roots. She worked in the graphic arts industry before turning to music full-time with the band zoebliss, which took its cues from Portishead and the folkier end of the trip-hop movement. “That was true to my tastes back then,” she says, “but I started listening to the family LP collection again and was amazed at how many Tammy Wynette and Charley Pride songs I knew by heart. It made me realize how much I love lap steel and the sound of a really good, solid country band.”

Madviolet spent much of 2004/05 on the road. They toured Canada in support of Worry the Jury both as a duo and with their Toronto-based band (which includes bass player Adrian Lawryshyn and drummer Robin Pirson). They participated in Tom Jackson’s annual Huron Carole fundraising tour on behalf of Canada’s food banks. A third trip was made to Switzerland and they broke ground for the first time in Denmark. And their inaugural trip to Australia was successful enough that they were invited back this February for a tour highlighted by a series of shows at the Tamworth Country Music Festival.

Unlike many musicians who roll restlessly from one tour stop to the next, Madviolet are as much travellers as touring artists. Sidestepping the Canadian winter, the self-confessed “freezebags” spent three months exploring Australia last year, documenting their adventures with snakes, sharks, wombats and bike thieves with a videocam. An intended songwriting holiday in Fiji was cut short due to oppressive heat, invasive mosquitoes and near-hallucinogenic kava (Fiji’s ceremonial drink). Instead they headed to Byron Bay, the most easterly point on the Australian continent.

John Reynolds, who had encouraged Brenley and Lisa to form Madviolet in 2001, liked their vision of a rootsier sound and invited them back to 18d, his residential studio in Notting Hill. explains Brenley. “There’s always been tension when we’ve recorded with other people, but never, ever with John.” Living in a suite attached to the studio was also a joy for two women who, says Lisa, “love to travel but hate to commute.” After morning runs in Hyde Park with Reynolds’ bull mastiff Marley at their side, the pair would settle into recording sessions punctuated by gourmet meals prepared by the producer himself.  (One menu favorite: Jerk cod with garlic, lime and coriander dressing.) Evenings would find a crew of musicians touring the local pubs or, on a couple of occasions, visiting Brian Eno’s apartment for friendly singalongs hosted by the famed composer/producer.

The relaxed, organic feel of Caravan points Madviolet in a fresh direction as a recording act, one that taps deep into their musical roots and channels the energy of their live shows. “I think we’ve got a lot closer to the essence of Madviolet – nobody’s going to mistake us for another acoustic chick duo,” says Lisa with a laugh. Adds Brenley: “We’re developing our sound. We’re building audiences in different countries on different continents. We’re excited to see where things go next.”