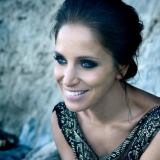 “I am so excited about becoming part of the Watchdog/Macklam Feldman management family,” says Kreviazuk. “Having had a happy home for many years at the agency side, it is so nice to be represented entirely by the company. This is a big step forward for me in my career, and I couldn't be happier.”

Watchdog is helmed by Executive Vice President Darren Gilmore in association with Sam Feldman and Steve Macklam. “It's a pleasure and honour to be working with Chantal,” says Gilmore. “She's a passionate and committed artist, songwriter, and philanthropist. Our work with her in all areas of her career and life is sure to be exciting and fulfilling. We're off to a great start.”

Kreviazuk begins a series of dates with western Canadian symphony orchestras in her Winnipeg hometown tonight (Friday). She’ll be showcasing new arrangements of songs from Plain Jane, her 2009 Maple Music Recordings album, along with a selection of older hits and audience favorites. The mini-tour will also include symphony dates in Calgary (Oct. 26), Vancouver (Oct. 27) and Edmonton (Nov. 1).

A classically trained pianist and mother of three based in Los Angeles, Kreviazuk has released five albums dating back to her double-platinum debut, 1996’s Under These Rocks and Stones. She is also an A-list collaborative songwriter (often with her husband Raine Maida) whose material has been covered by the likes of Gwen Stefani, Avril Lavigne, Kelly Clarkson and Carrie Underwood.