Ocean deep, moonshot high: Marianas Trench likes to push the extremes. Drinking deep from the goblet of rock, the band delivers lean, tuneful, hyper-excitable guitar anthems that kick loud and hard. Yet soaring in and around the guitar/bass/drum fury are four highly trained singers with choir-boy backgrounds and the skill to break into a cappella flights of harmony. The result: A novel mix of brash and innocent, yearning melodicism and over-the-top rock dynamics.

Fix Me, Marianas Trench’s full-length 604 Records debut, documents a hugely ambitious Vancouver quartet that has been relentlessly writing, fine-tuning and performing since the turn of the decade. “We are ready to take over the world and save the universe from evil,” says frontman and founder Josh Ramsay, only half kidding.  “We are persistent little bastards. We want to be doing 250 shows a year. We will eat Kraft Dinner every night. We are prepared to do whatever it takes.”

The album’s 11 songs, all but two under four minutes, cram in more hooks and ideas than the pop medium can typically absorb. The Dave Genn-produced sound is raw and alive, marked by Ramsay’s wounded howl, the rhythm section’s lockstep surge and one flaming guitar riff after the next. As for the tightly arranged tag-team vocals, they’re the real deal, free from any post-production tweaking and a highlight of the live show.

Marianas Trench comes by its hybrid rock/vocal sound honestly. “There was never a point where I thought, ‘Okay, let’s stick this together with that,”  explains Ramsay. “I grew up amidst a crazy amount of music. Most people are influenced by their favorites, and mine just happen to be from radically different sides of the spectrum.”

Ramsay’s dad, Miles, once owned Little Mountain Sound, the Vancouver recording studio that in its 1980s prime hosted Aerosmith, Bon Jovi and AC/DC. (“I can remember guys like Steven Tyler and Tommy Lee walking around, but I was a little young to be telling Tyler, ‘Dude, that was a wicked vocal.’”)  His mother, Corlynn Hanney, is a vocal teacher whose career was highlighted by two years of touring and recording with Leonard Cohen. “My parents were into the Beach Boys and anything else that had a lot of singing. Eventually I discovered Green Day, Foo Fighters, shit like that. But I never lost interest in all those cool vocal bands like Jellyfish.”

Ramsay racked up his first solo gig in a coffeehouse at 15. Seated beside him in the high school band was Matt Webb, a multi-instrumentalist who switched to guitar when he joined Marianas Trench in 2001. Both were also tenors in the school choir. Back home, Ramsay was learning to engineer his own songs, building teenage symphonies with the same 16-track Neve console Bryan Adams and Jim Vallance had used to write “Kids Wanna Rock” and “Summer of ’69.”

Over the years Ramsay has reigned in his hyperactive creative imagination.  The learning curve was mastered with input from a string of producers.  John Webster (Tom Cochrane) handled early demos. And once Marianas Trench was signed to 604, Warne Livesey (Matthew Good Band, Midnight Oil), Brad McGivern (Bif Naked, Lillix) and the Nickelback combo of Chad Kroeger and Joey Moy helped refine the material further.

It was Dave Genn, however, who got the call to co-produce Fix Me with the band.  “Genn was awesome,” says Webb of the Vancouver-based musician (MGB, 54.40) and producer. “I’ve respected and looked up to that guy for a lot of reasons. And he just came in and did his magic.”

Live, Ramsay and Webb trade guitar leads while the rhythm section of Ian Casselman and Mike Ayley keeps the sound powering forward; the latter are a pair of long-term friends who previously played in other bands together (and once had to call in an exorcist to rid the Vancouver house they were renting of unwanted spirits).  “The gig is you’ve got to be able to play,” says Webb, “but you’ve also got to sing.” For a lark during concerts, they’ve been known to croon a cappella versions of “Good Vibrations” and  Billy Joel’s “And So It Goes.”

Cocky and confident in the knowledge that Marianas Trench has worked supremely hard to get to this point, Ramsay says the band intends to break fast from the starting gate once Fix Me hits the street.  “All I can say is look out world, you’ve been warned.” 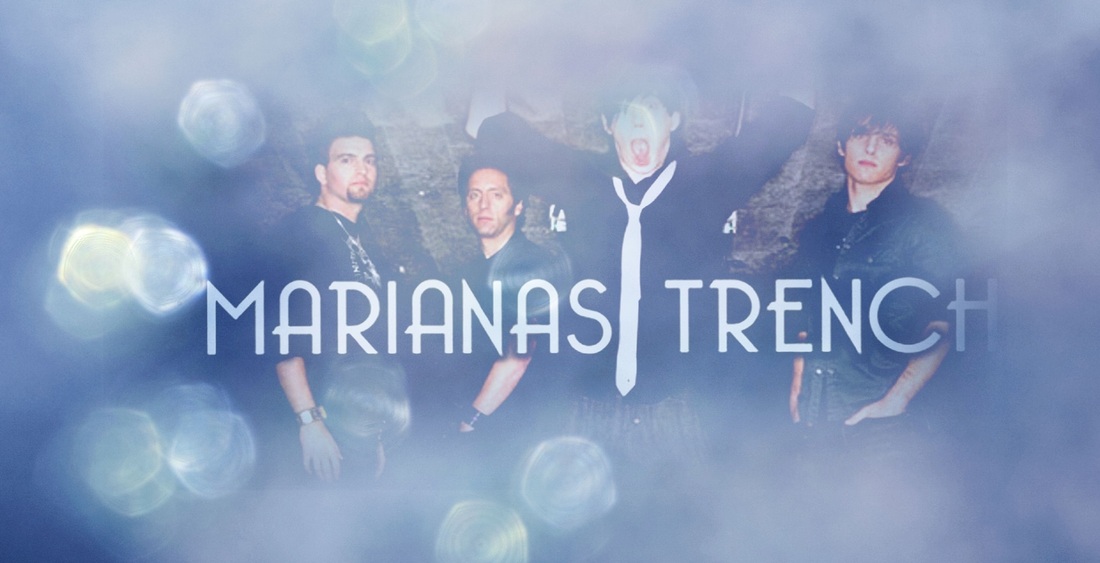